An NPC is a Non-Player City. An NPC, also known as a Barbarian's Town, does not belong to any alliance and has uniform regenerative properties. The level of an NPC indicates the maximum number of defensive units, troops, and resources to be found within.

Barbarian is a term for an uncivilized person, often used pejoratively, either in a general reference to a member of a nation or ethnos, typically a tribal society as seen by an urban civilization either viewed as inferior, or admired as a noble savage. In idiomatic or figurative usage, a "barbarian" may also be an individual reference to a brutal, cruel, warlike, insensitive person. The term originates in the ancient Greek civilization, meaning anyone who is not Greek". Comparable notions are found in non-European civilizations. Barbarian cities were settlements where barbarians lived.

Each NPC contains buildings that are all the same as its level, (ie. all level 1 npcs have all level 1 buildings). Each NPC contains an academy, forge, embassy, workshop, feasting hall, stable, inn, rally spot, barracks, relief station, beacon tower, and twenty cottages. Resource fields consist of one sawmill, ironmine, quarry, and the rest of the fields are farms. NPCs do not have any warehouses however. 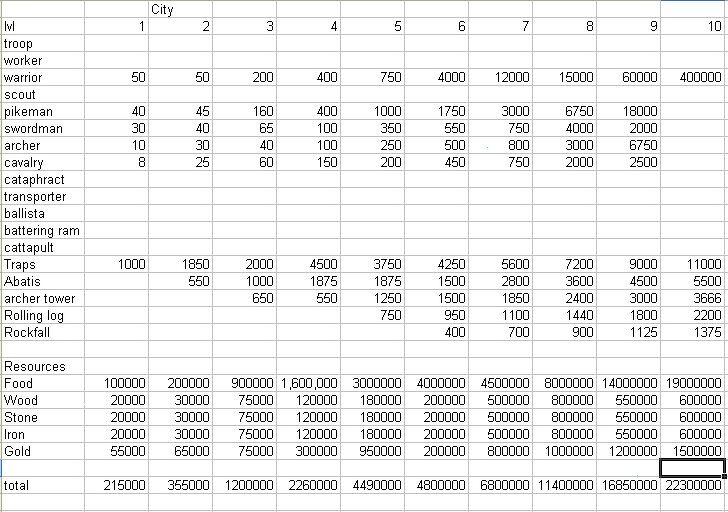 Barbarian Towns will NEVER EVER attack cities. However, if you try transporting to someone of much higher prestige, there is a possibility of your transport caravan getting attacked by barbarians. If they succeed, your transport caravan will be taken out, whether it be transporters or warriors and so on. They may all be killed and the resources will be taken. Often exactly half of the troops and resources will be taken. You will be notified of this in a plunder report listed in black text (Note how normal plunder reports are listed in red text.).

It takes an NPC 8 hours to regenerate all of its resources.

It takes an NPC 1 hour to regenerate all of its defenses, troops and fortifications, at a rate of 10% every six minutes (the same six minute mark that your taxes are collected).

NPC farming is the process of harvesting the benefits of attacking NPCs. NPCs yield two kinds of benefits: experience and resources. The specifics of the NPC farming process are covered in the section Plundering NPCs.

For maximum yield and efficiency, you will want to have as many zero-loss NPCs as close to your city as possible, to minimize the time wasted due to unit movement. For stronger players, having very high level NPCs close by produces very high returns at a predictable and efficient rate of loss. Building new NPCs is an option for cities with nearby flats.

Since NPCs fully regenerate their fortifications every hour, they can be attacked 24 times a day if you want to gain maximum experience for your hero.

WARNING The given formula for Lv.9-10 NPC is either outdated or simply wrong. Here is an example that demonstrate it: 110k Warrior wave with 251 ATT Hero (201+50 from Excalibur). The formula suggested ~65k Warriors. The attack resulted in total loss with little casualties made to the defending NPC

NPCs are the grocery stores of Evony. Think of transporters as your shopping cart, and ballista as your charge card that, if used correctly, never runs out.

Since NPCs regenerate all their resources in 8 hours, they can be farmed for full yield 3 times a day.

You can build new NPCs if you are able to build a new town. An NPC is nothing more than an abandoned player city. The level of the NPC will depend on the level of flat it was before you took it over.. Say the Flat was a level 10, once abandoned the town would turn into a level 10 NPC.

Lower level NPCs (1-5) can be plundered without losses by sending only a minimum number of ballista units for a given the level of NPC. Rainbowing (adding one or more of other troops in the attack force) for these NPCs isn't suggested since they'll just die on the first round against the NPC traps and abatis. If a battles reaches 100 rounds, you will be declared the loser and sent home with nothing, even if you have taken no losses.

Since NPCs regenerate all their resources in 8 hours, they can be farmed for full yield 4 times a day as they also regenerate resources after maintenance so time the attacks right just before and after the maintenance.

Since NPCs fully regenerate their fortifications every hour, they can be attacked 24 times a day if you want to gain maximum experience for your hero.

Althought ballistas are the best way to farm NPCs there are times when you need to plunder without having access to ballistas (or do not have enough ballistas). For those occasions (like in the beginning) it's recommended that you plunder low level NPCs (start with lvl 1, and then 2 when you've got enough transports and/or workers to carry the resources from a lvl 2 NPC) with a lot of warriors. Since you'll lose some (by traps etc) it's recommended to use warriors due to low costs and time to train. However, do not attack a NPC if you haven't got enough units to carry all resources back, using warriors will result in losses and you'll need to get every resource in order to be really effective.

Lvl 2 NPCs gives more resources than a lvl 1 NPC, but it also requires more warriors, which means longer training time. So always start producing warriors before you send your existing out on a raid, you'll always loose roughly 540 warriors on a lvl 1 NPC and 940 on a lvl 2 NPC.

It's not recommended to attack lvl 3 NPCs due to ATs.

If you want to add data, please have a more accurate attack value

See Chart of safe numbers of ballista to use against NPCs
See Reports for Archery vs. Horseback Riding Levels

The actual minimum number of ballista needed for zero loss depends on your combination of Archery, Horseback Riding, and Military Tradition levels, and also your hero attack attribute.

The maximum level of city you can attack without taking losses is level 5.

These figures were orignally posted by syoganai1111 on the Official Evony Forums.

It is unknown whether it is ever safe to attack NPC5 with Archery level 7.

NOTE: All of this information is based on old metrics. The game developers have since updated the attack statistics and made it a bit harder to attack NPCs. Also, attack metrics seem to vary from server to server. Talk with members of your alliance or other players on your server to get updated information on attack requirements to achieve 0 losses.